Is it Tomorrow Today, Mary? a story from Childminding Ireland 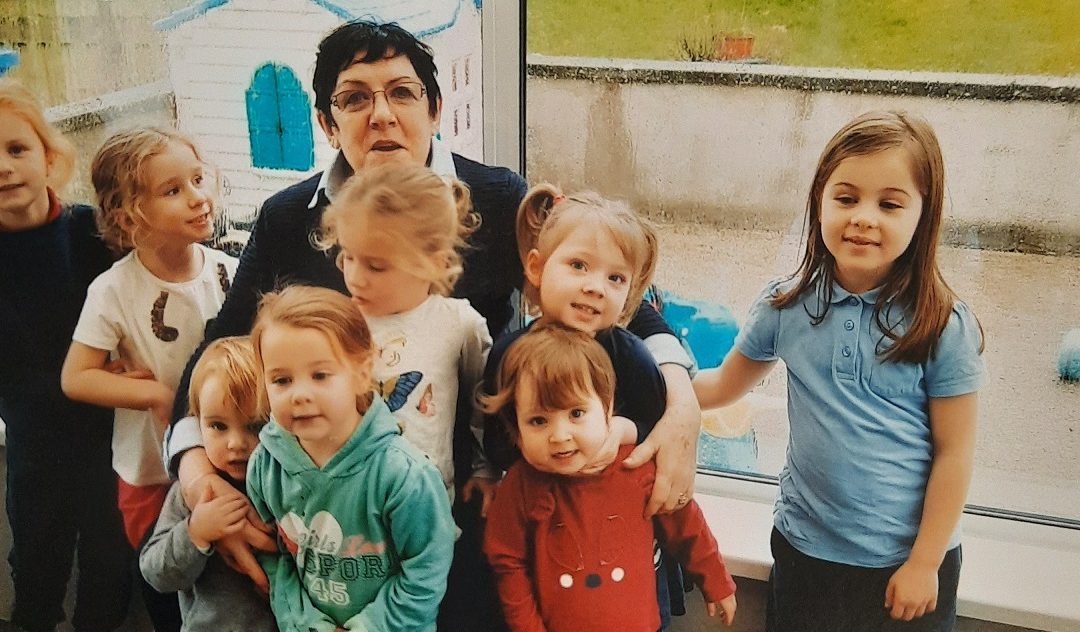 The first time I encounter childminder Mary McLoughlin I instantly feel a warm connection and want to hear more from her. She starts off by telling me a funny incident which has me both laughing and loving the innocence of children in equal measures! Mary tells me that 7 year old Clara declared one day that Mary had told her a lie. When Mary queried this, she discovered that she had told Clara a lie about her age. Mary had told her she was 21 – however Clara said this couldn’t be true as she knew her age was 44 because it was on her trousers hanging on the clothes line!

Mary was a childminder for 45 years and retired earlier this year having minded over a hundred children. She accidentally fell in to childminding when a neighbour approached her to mind her son in 1976 when Mary’s own son was one. She never looked back and loved every minute of it and was heartbroken to give it up.

Some of the children Mary minded stayed with her for a long, long time. In fact, years ago many of the children came to her at just six weeks old as maternity leave was so short. Frequently they stayed with her right through to First Year in senior school! She has also minded two generations from the same family – a testament indeed to what a great childminder she was. A bonus for Mary’s family has been lifelong friendship with her mindees. One of her daughter’s best friends was originally a child that Mary minded and they are still friends today, even though they now live in different countries.

So what was the secret to her success? Mary believes her secret was that she always treated the children in her care like her own. She made no difference between her children and mindees. They ate the same food, did their homework at the same time and got taken out for treats like hot chocolate just like her own children.

Mary was always highly organised – up at 7am with the dinner made by 8am. Although her approach with minding children was always to let the day flow. This meant she was guided by what children wanted to do and got fully involved in their games. For example, if they were role playing hairdressers she would let them brush and ‘do’ her hair.

Mary’s top tip for childminders is to let children feel and experience a home from home environment and welcome children to be part of your family. It is clear that for Mary, childminding was a labour of love and more than a business.

Mary finishes our chat with another priceless story which has me in stitches! It centres around the ‘we will do it tomorrow’ promise which adults often make when talking to children. One day Caoimhe arrived in to Mary’s house with a sad face and said ‘Mary, is it tomorrow today?’ With which Mary replied ‘Yes of course it is!’ Caoimhe brightened up immediately and thought ‘let the fun begin’!

Children’s names were changed in order to protect their identities.